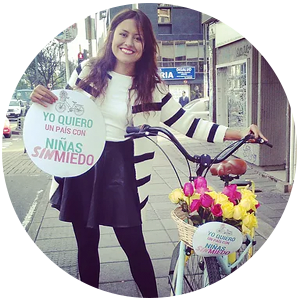 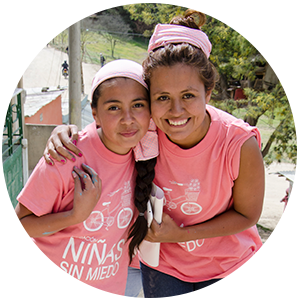 I was an insecure woman, so much so that one day my boss asked me ‘why are you afraid to give me a report?’ He told me without intending to hit me. His observation came with advice. He told me to ride a bicycle. I was out of place. What did one thing have to do with the other? She was right, it was obvious that I was a woman full of fears. In 2013 she undergoes an attempted sexual abuse on a street in the city of Buenos Aires. At the root of that I was afraid that the people in the street would come to me, dressed me as I did not want, lived in fear, without trust in me or in others.

I followed the advice. At 27 I did not know how to ride a bike. She was determined to try. I went with my mom to the Biciescuela, a group of people who teach for free. We were both in the same. My mom learned first; It was an exercise of connecting the mind with the body, of thinking that you will not fall. In short, pedaling without help was a simple and great act of security, as if you took a pill that produces confidence. I was injured in a fall. The situation was presented so that I would give up, but I continued. I could do it after a lot of effort! And not content with my conquest, I faced the street. I jumped on top of both wheels. I slowly added up blocks. I defied myself. As I was appropriating the city aboard the bike, my way of being was another. He had left the sad and fearful woman away. I did not care to go in skirt, I got pretty, no matter if I sweated. I was not careful that some passersby would disrespect me with their compliments, the intolerance of the cars.

In that introspective exercise, they gathered a lot of experiences in past, present and future. So I gave the answer of my project of life, put it down to girls in a situation of vulnerability. He had figures and explored ways to intervene. When you connect with me, I thought about education tools to prevent teenage pregnancy and gender violence. I discovered that in Cambodia there are initiatives of girls who go to school by bike, to prevent sexual violence and to develop safety. I remember saying, “I’m not the only one in the United States, I found Litlle Bellas, a group that empowers through the bicycle.” In that puto of my story, it all came together for good. In March of 2016 we began to intervene in Soacha.

We started with 11 girls in 2016 between 8 and 15 years, today we have 30 girls enrolled. At that age you make important decisions in your life, in an environment like Soacha municipality that occupies the second place in Cundinamarca for denunciations of sexual violence, it is important to provide education tools and new scenarios for women and girls who are the transforming force of the society.

If you are reading this letter it is because you are interested in what moves the team of Fearless Girls to continue with this dream.

Join us donate a bike donate time and make part of the effect girl who today moves like a pink and blue cloud in the mountains of Soacha.

Natalia Andrea Espitia Perilla
Founder of Girls Without a Fear