On Saturday, July 7th, Niñas Sin Miedo teamed up with a diverse group of female professionals and role models to deliver the organization’s first empowerment conference for the girls in the Bogotá and Soacha areas.  Twenty-two girls of Niñas Sin Miedo came to the event in Bogotá from Soacha where 43 other girls from Bogotá joined them. An excited group of volunteers and Niñas Sin Miedo staff, many dressed as superheroes greeted the girls and presented them with welcome packages of tiaras and tools the participants used throughout the day.

Five amazing speakers led the stations and each promoted ‘powers’ for the girls to obtain through fun activities. Jocelyn Meneses, an Afro-Colombian model, and actress demonstrated the “I am Unique!” power.  Fashion journalist and blogger for plus-sized women, Laura Agudelo, provided the girls the “I Love Myself!” power. Jennifer Cañaveral, the first deaf Colombian to earn an architecture degree, and who learned how to read lips and communicate in five languages, revealed the “I Believe in Myself!” power.  As for the fourth power, two members of the local RAKAS female bike polo team inspired the “Yes I Can!” mantra.

Internationally acclaimed actress, Jocelyn Meneses, began her sessions with the girls by recounting her story of coming to accept herself as a black woman with frizzy hair within an industry dominated by white conceptions of beauty. 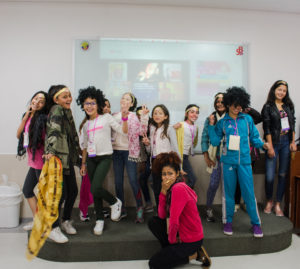 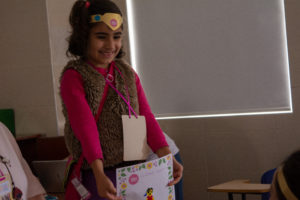 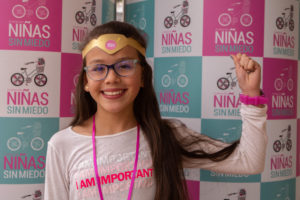 Laura Agudelo, the founder of LaPesadadeModa.com, shared her work of promoting positive body image with the girls.  She communicated the significance of accepting and loving oneself the way you are. Laura also spoke with the 48 parents of the participants who attended the event and encouraged them to support their kids in both the way they choose to dress and in the activities in which they participate.  As Laura puts it, self-confidence in children means that the entire family creates a positive and reassuring environment. #ILoveMyself

While Jennifer Cañaveral lost 98% of her hearing as a young child, she did not let this adversity stop her from learning to communicate in Spanish, English, Swedish, French, and German, or from becoming an accomplished architect.  Jennifer inspired the girls at the event by relating her experiences and displaying how the girls can triumph over the obstacles in their own lives. With Jennifer, the girls learned breathing exercises that will help them relax when they find themselves in stressful situations.  The girls activated their “I Believe in Myself!” power with Jennifer by learning and dancing beginner steps of flamenco. Throughout these exercises, the girls wore earplugs to understand the difficulty of communicating without hearing but overcame the challenge by practicing reading lips in Spanish.  #IBelieveInMyself

Kate and Lina from RAKAS led the “Yes I Can!” station and demonstrated how the girls could succeed in three stages of life:  Childhood, adolescence, and adulthood. As living examples of broken gender stereotypes, Kate and Lina explained how they brought the all-female RAKAS bike polo team from a vision to international success.  The RAKAS leaders also asked the girls to write down their life goals as well as their biggest fears. To activate their “Yes I Can!” attitudes, the girls balled up their papers of fears and used the polo mallets to hit them as hard as they could.  Meanwhile, Kate and Lina instructed the girls on proper polo techniques. With the leaders of RAKAS, the girls learned a new sport with two of Colombia’s female representatives, which will inspire them to pursue new opportunities in their lives. #YesICan

While the girls participated in the four different stations, representatives from Dove and Unilever spoke with the parents to discover new perspectives on life with their girls and to support them as they pursue their dreams.  After the girls finished the activities, each of the speakers chatted with the girls and their families about the incredible day. To wrap up, famous digital media star, Sophie Giraldo inspired the girls to follow their dreams, even if they do not feel support from the people around them.

The lasting impact of Niñas Sin Miedo’s first female empowerment conference for girls is tremendous.  The girls left the event with a new mentality because the experiences fortified their self-esteem and the belief that they can accomplish their dreams.  With this first empowerment conference, Niñas Sin Miedo succeeded in empowering not only the girls but their families as well to break gender norms and fight for gender equality.

This site uses Akismet to reduce spam. Learn how your comment data is processed.